Below you will find the text of an email I sent to Lindsay Redford, the news director at KSTP (link to her bio). If you find this story as outlandish and irresponsible as I do, I’d encourage you to email her as well. Her email address is lradford@kstp.com. If you discuss this on twitter, use the hashtag #pointergate.

Dear Ms. Redford,
This story, by Jay Kolls, should be an embarrassment to your station. For god’s sake, Minneapolis mayor Betsy Hodges is simply pointing her finger, just like she’s doing in this photo: 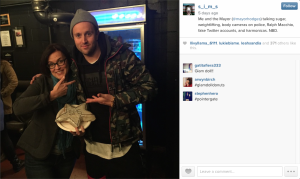 There is zero evidence that she’s “flash[ing] a gang sign”, and anyone with any common sense would realize that it is, quite frankly, stupid to jump to that conclusion. Have you watched the video of Navell Gordon, mayor Hodges, and other volunteers that is embedded in Shaun King’s excellent article on this? If not, I highly recommend that you do.
This kind of irresponsible “reporting” is shameful, and would be funny if it weren’t so damaging. Jay Kolls should be fired for such incompetence, and at the very least your station should issue an apology.
Park Silkenson

The problem with this “press release” is that Apple made no such announcement.

As of March 6, 2012, Photovine will be shutting down. They say the app won’t be supported after that, but whether it will remain functional is not clear.

Mail.app in Mac OS X Lion STILL does not show sent messages in the threaded view

I’m still digging into the details and new features of Mac OS X Lion, but so far I’ve come across one complete disappointment: Mail.app STILL does not include your sent messages in the threaded view. I don’t understand why all email programs, both web apps and native apps, haven’t incorporated this feature that GMail has had for years.

The fourth Mission Impossible movie comes out this December. It looks much better than the last two.

Why I opted-out of the back-scatter X-ray machine at the airport, and why you should, too

Having just opted-out of the new back-scatter x-ray “security feature” myself just a week ago, I’ve noticed several articles on the web talking about it. Here are some of my favorites:

So, to summarize: With no supporting evidence whatsoever that it will make anyone any safer, and in response to absolutely no credible threats, the TSA has decided to implement a policy, that nobody asked for, in which every passenger must allow TSA agents to either see or touch their genitals before boarding a plane.

Paul Kafasis Comments. Warning, there’s a graphic image at the bottom of the post showing how the image from a back-scatter machine (which is inverted, kind of like the negative of a film) can be reversed to produce an almost life-like result.

And if you need more proof of the invasive nature of these scanners, this article talks about a TSA security guard that assaulted another guard who teased him for having a small penis. What does that have to do with the scanners? Well, during training the guards themselves went through the scanners and Rolando Negrin, one of the guards, was teased by the other guards because of the size of his penis. He later assaulted one of the teasers in the parking lot, because the other guard would not apologize.

“Other” category of my iPhone capacity has disappeared

A couple weeks ago, the “other” category of my iPhone Capacity meter in iTunes shot up to almost 5GB. From what I’ve read, it should normally be around 400-500MB, and after a restore from backup, mine went back to around 478MB. I’ve been unable to find out what the “other” category consists of, but yesterday I noticed that it has disappeared altogether.

(there used to be an orange “Other” category at the end, between my Apps and the Free space.)

I’m not sure what this means, and it’s probably nothing, but it’s kind of strange nonetheless.

In December, we went up to Michigan again for Christmas and New Year’s Eve. It was great to have a couple weeks of real winter with snow, but I can’t really see myself living there permanently. I mean, just today I tweeted that I’m ready for summer. And when I say that, I mean 100 degree Texas summer.

Anyone notice that the new Kias look like Jags…kinda???

Anyone who doesn’t understand the desire to eat little baby fingers, fillet their little thighs, or to poke a straw through the soft spot in a baby’s head and suck out their brains like Capri Sun, well, they just don’t get it.

toodark.com
Create a free website or blog at WordPress.com.